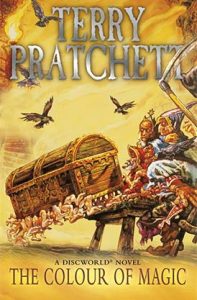 I recently had the opportunity, due to a lengthy flight, to re-read The Colour of Magic, the first of the Discworld novels.

I had forgotten how much fun it was.

Sure, it’s not as polished as some of the later works in the series, but the characters are still vibrant and alive, even if somewhat finding their feet.

The film version, with David Jason (who is probably one of my favourite actors of all time) and Sean Astin, is also well worth watching. Although I preferred Jason as Albert, Death’s manservant, rather than Rincewind.